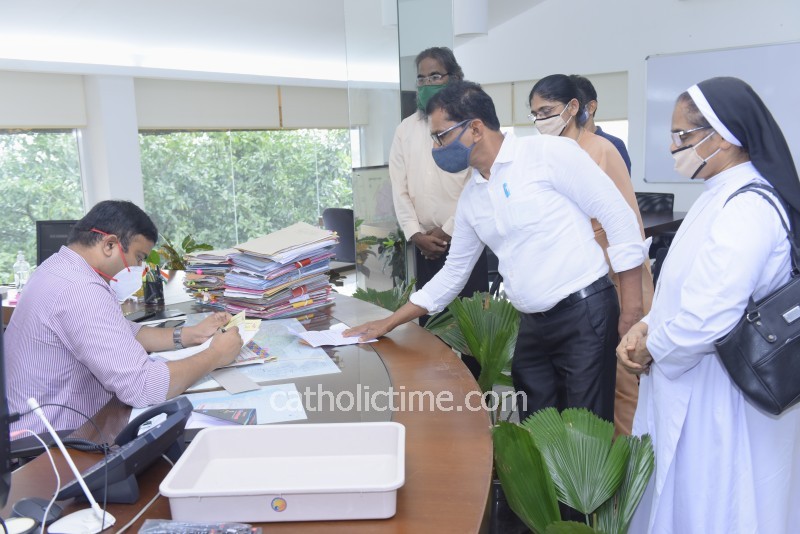 With reference to the above, Catholic Sabha brought to the notice of DC, following aspects regarding LadyHill Circle.

Ladyhill has its own historical significance. Apostolic Carmel Sisters landed in Mangaluru from Beyonne, France and started its Mission of Education. In 1885 when Mother Mary Des Anges first Superior General came down to Mangaluru, local persons requested her to open a school for girls. Area was hilly area. In the said area St. Ann’s Ladyhill Victoria Girls High School was started. Large number of females were being educated in the said school. The term Ladyhill assumes its importance mainly for the reasons that girl children were provided education. As a mark of respect for the women empowerment, everybody called the area as Ladyhill. Several thousands of women have benefited through education. Hence historical significance of area cannot allowed to be changed. Since more than 100 years, said place is called Lady Hill Junction/ Lady Hill Circle.

Infact, said school is started by Apostolic Carmel Sisters under the patronage of our Lady of Mount Carmel. Lady of Mount Carmel refers to Mary Mother of Jesus Christ. Catholics revere Mother Mary and it has religious significance also. Change of existing status quo will wound religious feelings of lakhs of Catholic residents of Mangalore City. Hence in the interest of maintaining communal harmony also, it is just and necessary to retain the same name.

Apart from the same, Nationalized banks like Canara Bank, South Indian Bank etc., there are educational institutions also which run under the name Ladyhill like Ladyhill primary school, Ladyhill High School, Ladyhill P U College since more than 100 years. There is also a rickshaw and bus stand known as Ladyhill rickshaw stand and Ladyhill Bus Stand.

Even for bus permits it is mentioned as Ladyhill Junction and number of buses ply through the said junction. Also Karnataka Bank has been permitted to design, construct and maintain Ladyhill circle at Lady hill Junction for a period of 3 years as per its resolution of Mangaluru City Corporation dated 30.01.2020 in its Proceedings No. ಮನಪಾ/ಇಂ.ವಿ-1/ಸಿಆರ್-ಅ.ಕೋ89-2019-20/ಎಫ್-6 . Also as per Mangalore City Corporation resolution No.98/2018-19 dated 28.02.2019, it passed a resolution to name the road between “Ladyhill Junction to Newchitra Junction” as “Sri Gokarnatha Kshethra Rasthe”.

In the said area, large number of Catholics reside. Now if the name is altered, it will hurt the religious feelings of Catholics and also it will twist the history. Earlier in the year 2003 and in the year 2018, attempt was made to change the name of Ladyhill Junction but because of the objections raised by the public, said proposal was dropped. Hence it is unfair to change the name of the circle.